Why use native Willows, Black cottonwood and Red-osier dogwood for ecosystem restoration?

First, these are all rapidly growing species that are widely used for slope and streambank / lakeshore stabilization (for more see Note 1 below). Root growth on these is rapid and prolific, and the roots have high strength parameters. They are the main species used in soil & water bioengineering treatments in western Canada as they root readily from live cuttings (see Ref. 1 below).

Cottonwood and some willows thrive in disturbed areas such as along roadsides and in abandoned gravel pits. The rapid growth and deciduous nature of these plants is important for spurring nutrient cycling processes and building soil in these areas. This makes them important for use in general ecosystem restoration treatments.

Cottonwood, Red-osier dogwood and some of the willows are also key riparian species. These are generally very flood-tolerant and often form the primary woody species in wetter areas, providing nutrient-rich litterfall into streams & lakes and bank stabilization. 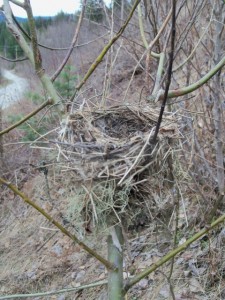 Small birds often build their nests in willows, dogwood and young cottonwood (note: live cuttings are collected in the winter months so nesting birds are not disturbed).

Willow buds also provide winter and early spring food for some birds, and the catkins provide early spring pollen for bees and other insects. Birds such as grouse and northern flicker eat dogwood berries.

The shoots and bark of these species also form important food for beaver, ungulates, and smaller animals such as vole and rabbit. This is important when it comes to their function in the ecosystem, however it can be the bane of ecosystem restoration practitioners. Some damage by these agents is fine however, once a thriving tree and shrub community is established. For ideas on how you can protect the plants from these agents during the critical establishment phase – see Protecting your plants in the field.

The rapid growth and tree or shrub stature of the willows, dogwood and cottonwood makes them suited for herbaceous invasive weed control through “successional advancement.” If larger stock (i.e., TRS cuttings) is planted at a sufficient density (e.g., 1 to 1.5 m spacing) in areas invested with certain invasive weeds, it is possible to rapidly shade-out these weeds. In some cases even if the weeds are not completely eliminated from the site, with their relegation to the understory and the presence of a tree and/or shrub community, important habitat is still created. Here is an example project where this approach worked – 2013 Earthday Project.

Replacing herbaceous weeds with fast growing trees and shrubs will also provide carbon-sequestration benefits, and when viewed at a landscape scale this has the potential to be substantial.

Note 1: I would rank the speed of shoot and root growth among these species as Cottonwood > Willows > Red-osier dogwood.

Cottonwood is often though of as a riparian species, and does get to great size in moist more nutrient rich areas – but this species is also incredibly drought resistant – look for it in dry upland areas and you will find it. I hypothesis the reason it can establish in these areas is because it can grow roots at lightning speed (relative to the other plants in it’s system). Even dry, upslope areas are usually moist for a short period in the spring – so seeds of all kinds can germinate and start growth here – but often only cottonwood  can chase that wetted front down as it rapidly recedes towards summer. Cottonwood is a very light demanding species.

The native willows can be generally divided into two groups, 1) upland willows (e.g., Salix scouleriana, S. Bebbiana), and riparian willows (e.g., Salix sitchensis, S. exigua). It is my obserevation that S. sitchensis roots substantially faster and in a more robust way than do the upland willows. I am still unclear where S. exigua stands relative to the others in this regard. When undertaking reclamation work it is important to match the willow types (and preferably also species) to the site. Upland willows for slopes, riparian willows for streambanks and shorelines. For more on this see Harvest of Cuttings. Willows are generally light demanding species.

Red-osier dogwood is a moisture-requiring species and is not suited to areas that experience drought conditions during the summer. This is also a moderately shade tolerant species, growing well in the understory of especially cottonwood.